There are three common foot strikes when running – forefoot (toes), midfoot (behind the ball of the foot) and heel strike.
When considering efficiency and sustainability, a midfoot strike is viewed as being the ideal strike point. Here’s why;
Landing on the midfoot provides the greatest level of stability and shares the load on the legs more evenly as opposed to forefoot/toe strike or heel strike. Midfoot strike also leads to higher cadence (the number of times your foot strikes the ground) which results in faster pace. Forefoot strike (rarely does the heel touch the ground) can lead to even higher cadence but is often adopted when sprinting as it has the benefit of greater responsiveness on impact but can be challenging to sustain over distance. With forefoot strike the calf muscles work over time, shortening and contracting during their gait cycle which can be taxing on these muscles. Imagine running in high heel shoes – lowered stability on landing leading to greater impact on lower limb muscles, fatigued calves and achilles and the risk of injury. However, still with a focus on responsiveness, but more kind to the body over distance, midfoot strike propels the body forward, keeping momentum with a heel flick behind, the stride length places the foot under the greatest body mass when landing and the foot bounces off the ground comfortably, quickly and with stability. Compared to toe strike, midfoot strike is far more efficient over distance AND reduces the risk of overworking key muscle groups. Midfoot strike is also a more beneficial foot strike for efficiency gains compared to the third mentioned foot strike point, heel strike. Heel strike pulls the body back, ‘putting the brakes on’ and losing forward momentum, which can lead to over striding – landing the foot too far forward of the body resulting in a slower cadence and a greater force on the hamstrings.
So to keep momentum, improve pace, conserve energy and potentially reduce the risk of overuse injury, midfoot strike is viewed as being the most efficient foot strike.

Foot strike point is only one piece of the run efficiency puzzle. Now let’s talk posture. For running efficiently, let’s consider one of the main movement factors we are faced with, gravity. To run efficiently, we need to work with gravity not against it. Adopting a posture with a slight lean forward but continuing to keep the chest up and open, a relaxed upper body and a midfoot strike, energy usage is reduced and running just become that little more efficient. Even with the slight lean forward we want to still maintain a relatively tall posture keeping the head up and in neutral position so you are looking a few metres ahead not down to the ground. In distance running we want to ensure we conserve energy so limit the use of the arms. The arms are free moving in the direction we are running. Avoid swinging the arms across the body creating unnecessary resistance or force against the body. In faster paced running, such as sprinting, the arms play a greater role in driving us forward, but for a more sustainable pace over distance, let’s keep the arms relaxed, shoulders back and down, chest up and ‘open’ to allow air in, arms swinging naturally beside the body and hand grip which is representative of a light ‘cup’ grip – no clenched fists or white knuckles!

Through understanding the benefits foot strike and posture play when running you will master the most efficient way to run but does it stop there? No! An efficient runner is also a strong runner. Running efficiently is not all about just running. Strong, responsive muscles that can last the distance are key to becoming the most efficient runner, staying injury free and addressing any run based imbalances. Strong bodies are also more ready to be fast bodies! Invest in a well-rounded exercise program that builds in functional strength and flexibility training and ensure the program targets more than just the legs. Focus on legs, glutes, core and shoulders. A strong runner is a more efficient runner – faster, more powerful, more responsive, more efficient!

Note: If not experiencing injury and if comfortable with your running, there may be no need to change the way you run. However, if you are finding you have a repeat injury or ongoing pain associated when running OR you are investing to become a more efficient runner, faster and stronger, you may wish to consider working with a coach to re-train your running technique. Zone Performance Coaching will work with you to support your run goals. 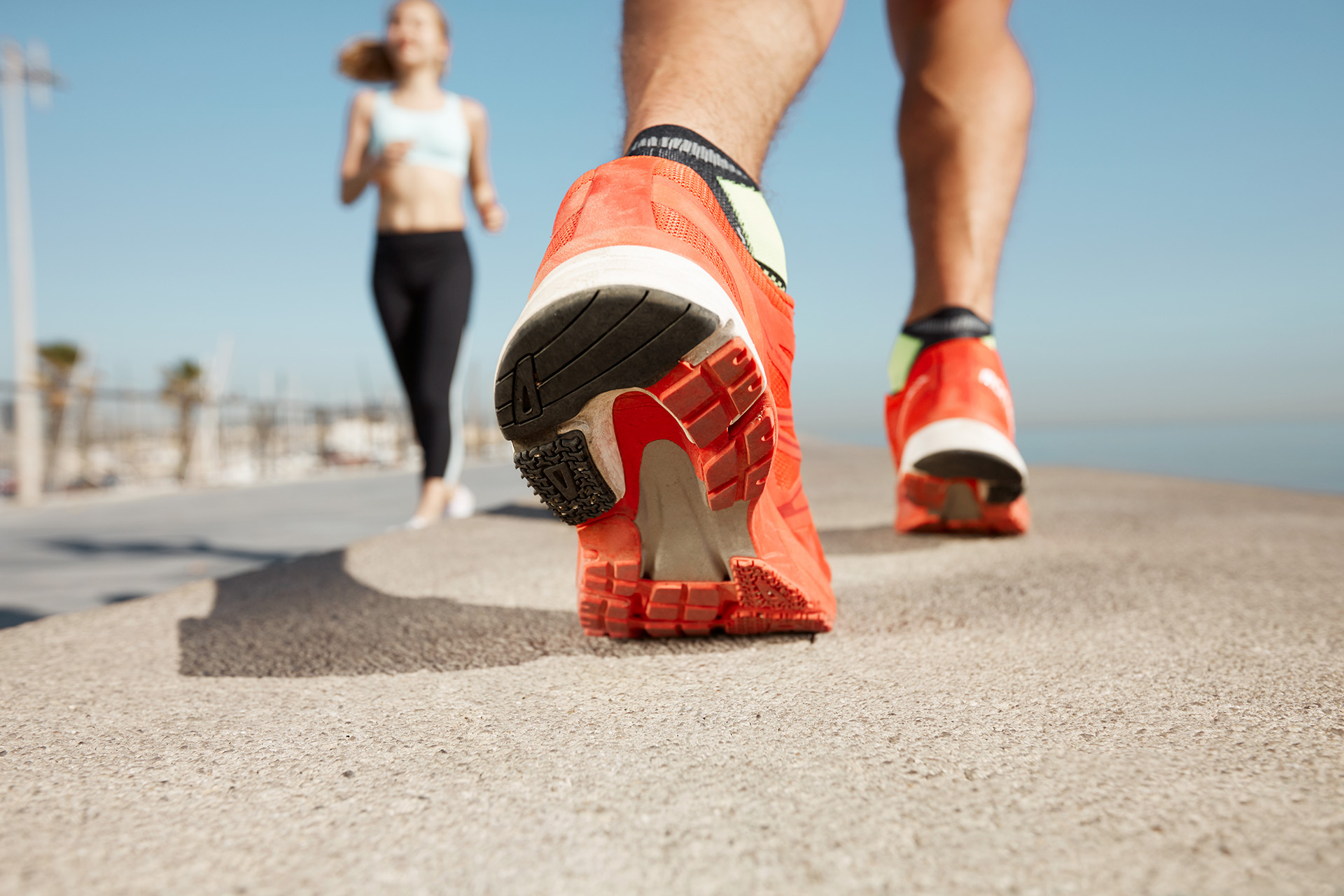 Under the FMS model, the foundations of functional movement need to be set before functional performance and functional skill can be achieved.  In supporting our Athletes, we assess the movement of the Athlete and identify opportunities for improving overall power, speed, strength and reducing the risk of injury.  We ensure every Athlete works towards establishing a strong foundation to then build on their performance and fine tune their sports skills.

Before performance-based outcomes can be achieved to the Athlete’s full potential, the body should be free of restrictions and free of imbalances.  We ensure that the Athlete does not add additional load to their training efforts until there is confidence in the sound movement of the body and the foundations are set to progress with the added challenge.  Athletes are educated on the need for releasing (soft tissue work), mobility (joint range of movement) and stability (to make us more efficient) in movement and follow a program to support this.  When the foundations are strong and stable, and movement is fluid, we progress the Athlete’s training to focus on functional performance – change of direction work/agility, landing skills/responsiveness, efficiency, speed, power, strength, core stability.  The Athlete learns to train smarter not always harder.

Investing in ensuring strong and stable foundations leads to fitter, faster, stronger and more responsive Athletes.  Injury risk is reduced, and performance output increased.  The Athlete’s true potential is unlocked.  Zone Performance Coaching’s Athlete Development Pyramid provides a guide for training progression and ultimately influences the Athlete’s potential for quality results.  It is the building block for continued development from education to application to outcome.  Zone Performance Coaching offers total commitment to long term Athlete Development supporting and guiding every Athlete from recreational runner to those striving for the next podium finish or to become more effective in their chosen sport.  The principles and ongoing commitment apply to all our Athletes.  We take the Athlete from assessment to performance.  We educate and enable our Athletes to enhance and to excel in their personal fitness endeavours with the application of the Athlete Development Pyramid.

Your resting heart rate is elevated, your thoughts are strained, your body is ‘restricted’, your output is frustrating, past injuries are niggling and if anyone asks you again ‘are you doing ok? What’s wrong?’, you might just SNAP!

These are all signs your body needs to rest. In training for an event,  traditionally you may have been taken the approach to continue to build on your training load until you are training at or above the distance or duration of the actual event. You feel confident you can now tackle the event but you are exhausted! How can we ask your body to perform at its best when it is completely fatigued? We can’t. Well not without serious risk of injury or potential illness or prolonged post event recovery.

Building rest days and even rest weeks into your training schedule can be the difference in entering event day completely depleted or all fired up and ready to go. In my experience with event preparation, you want to ensure you aim for one complete rest day each week. If you are like me, and find it hard to sit still, this rest day may come in the form of a stretching/flexibility focused session, a paddle in the pool (not hard-core laps) or even just a leisurely walk or ride with the kids but whatever it is, it needs to be time away from your structured training routine. In your training programming, it is also wise to ensure you have a lighter week every four weeks. This doesn’t mean a week off from your schedule – that could lead to injury if you stop completely for a full week then ramp things back up to where you left off – but more a reduction of up to 10% on your training load for that week, reduced distance, reduced intensity and reduced frequency. You continue to train but your output is lessened and has a different focus. The festive season can be just your opportunity for ‘de-loading’. Then you re-set and you are ready to enter the next phase of your training re-energised and refocused. Ready to take on a New Year or new event.

The festive season can take its toll and offer a benefit in many forms. Not only can we expose our bodies to food and drinks we wouldn’t often consume, we can also sacrifice good quality rest with the hustle and bustle of it all. Quality rest also comes in the form of sleep. Sleep is when our body’s repairs itself ready to perform at the expected level the following day. Where possible, we need to aim to get 7-8 hours of quality sleep each night. If this is not possible, you want to ensure the sleep you do get is solid, uninterrupted repair time. To promote quality sleep establish an evening routine and attempt to stick with it as much as you can, appreciating a few late nights here and there during the silly season can have an impact on your training performance, so your training output and expectations need to be adjusted to suit – think ‘de-load’, lower intensity shorter duration training sessions. Also allow yourself flexibility. With the festive season there may be a period of time away from your day-to-day job, this presents an opportunity for you to train at a different time, in a different way – holiday workouts can be the key to reinvigoration! When you are back in the swing of routine, ensure you make sleep a part of your training program. Like your other activities, it is non-negotiable and has to happen. Nothing gets in the way of your Sunday run, so don’t let anything get in your way of a good night’s sleep. A rested body is a more responsive body. With the introduction of ‘de-load’ weeks your training output improves, performance is elevated, injury risk reduced, mindset positive and you are far more pleasant to be around! WIN WINS ALL ROUND! Embrace the festive season and ‘de-load’.

“If you get tired, learn to rest, not quit” (unknown)